The Corral is a military building in Age of Empires III: The WarChiefs that is unique to Iroquois and Sioux, and becomes available once the Colonial Age is reached. It fulfills a similar role to the Stable.

As Corrals are unique to Iroquois and Sioux, only technologies that they have access to are shown in the following table:

As Corrals are unique to Iroquois and Sioux, only their cards and other civilizations' TEAM cards are shown in the following tables:

"A corral is a building in which horses are housed. Horses provided the American Indians with speed and mobility, particularly during battle and when hunting large game such as buffalo.

After an extended period of absence from the Western Hemisphere, the horse was reintroduced to the New World in the 1500s by the Spanish. As horses spread across the continent, the Plains Indians in particular became known for their skills as riders and horse breeders." 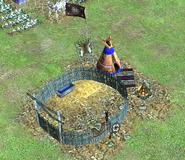 A Sioux Corral
Add a photo to this gallery
Retrieved from "https://ageofempires.fandom.com/wiki/Corral?oldid=258185"
Community content is available under CC-BY-SA unless otherwise noted.