The Consulate is an economic and military building in Age of Empires III: The Asian Dynasties that is available to the Chinese, Indians, and Japanese. It allows an Asian civilization to enter an alliance with one of eight European civilizations (or for the Japanese, enter isolationism) at a time.

Each choice provides passive bonuses, but also access to technologies and units acquired through the spending of export. The Consulate menu also allows for configuration of the player's export gather rates.

To ally with a European civilization (or enter isolationism for the Japanese), the player needs to select the option through Open Relations, which costs 100 export (25 export with Diplomatic Intrigue Home City Card) and takes 10 seconds to complete. Once the player forms an alliance/enters isolation, they will receive the ally's associated bonus and have access to the ally's armies/units and shipments/technologies at the Consulate.

An Asian player may only have one ally at a time, but multiple Asian players may have the same ally.

Consulate shipments and technologies vary depending on the allied civilization, which ranges from economic and military units and improvements.

For European allies, the Brigade shipment will become available once the Imperial Age is reached, which consists of a large number of the allied civilization's best units.

Consulate armies are similar to banner armies, in which they are groups of units trained in a single block. They usually consist of the allied civilization's best units, notably those which can be upgraded to the Royal Guard level (e.g. Redcoat Musketeers) or those that cannot be trained by the ally but can be shipped via certain Church technologies (e.g. Roger's Ranger Skirmishers). Instead of being trained as armies, units provided by Japanese Isolation are trained much like regular units.

Unlike their regular counterparts, Consulate units start with +10% hit points and attack and are upgraded in every Age up starting from the Fortress Age (Industrial Age for artillery and Ninja):

This allows Consulate units to provide a much needed bolster for some Asian civilizations, especially those lacking in certain fields or when the game's outcome are not in their favor.

Available for Chinese and Indians

Available for Chinese and Indians

Available for the Chinese

Available for the Indians

Bonus: +7 LOS for all units and buildings

Available for Indians and Japanese

Available for the Chinese 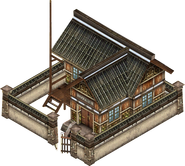