Age of Empires Series Wiki
Register
Don't have an account?
Sign In
Advertisement
in: Age of Empires III, The Asian Dynasties, Spanish,
and 2 more

The Conquistador (literally "Conqueror") is a ranged cavalry native warrior in Age of Empires III: The Asian Dynasties that can be trained at a Trading Post built on a Jesuit Mission settlement.

The Conquistador is a light cavalry that is very similar to the European Dragoon. It is cheaper than a Dragoon, but possesses less hit points and slightly less attack. Due to its availability in the earlier age, it can prove to be advantageous to the civilizations that lack a light ranged cavalry in the Commerce Age.

This unit is a straight nod to the Spanish unique unit of the same name from Age of Empires II: The Conquerors. 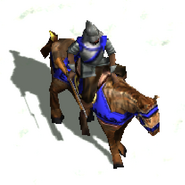