The Conquistador (literally "Conqueror") is the first unique unit of the Spanish in Age of Empires II: The Conquerors. It is a mounted gunpowder unit with high armor.

Conquistadors are ranged cavalry with a high attack strength and are essentially a mounted form of the Hand Cannoneer, although play similarly to the Cavalry Archer and should be treated as such. Conquistadors have the advantage in mobility and durability over Hand Cannoneers. Although they are the shortest ranged gunpowder unit and unlike Cavalry Archers do not benefit from range increases, their increased mobility makes them far more formidable and very heavy hitting.

Conquistadors shine when using hit-and-run tactics, their short range and relative mobility often force them into this position when being chased down by infantry or cavalry. In groups, they can release a devastating volley that will severely damage enemy formations. They are frequently included in formations of Knights, who can soak up damage from ranged units while the Conquistadors kill enemy Monks. Conquistadors in turn provide great damage output to soften up the enemy before the Knights get in close.

Enemy cavalry are a large threat to Conquistadors, especially Camel Riders. Siege weapons can also devastate a formation of Conquistadors so they should never stay still for too long in battle. Halberdiers can also hurt Conquistadors badly, provided they can catch them. Elite Skirmishers are also effective against them, though not nearly as much as against Cavalry Archers, because the Conquistador's attack overpowers the Skirmisher's pierce armor. They can also be countered with groups of Eagle Warriors. Due to their attack bonus, Conquistadors do a decent job defending Castles against Rams, especially in the Castle Age. 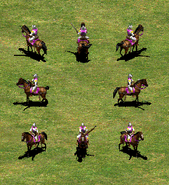 A group of Conquistadors 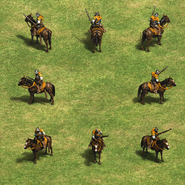 A group of Conquistadors in the Definitive Edition 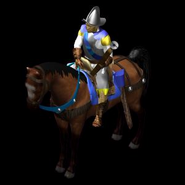 A render of the Conquistador model 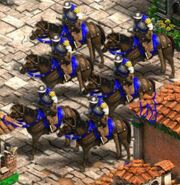 Conquistadors in the Definitive Edition

Three conquistadors from a 1646 engraving by Alonso de Ovalle

Conquistador in the HD Edition and Definitive Edition