+10 vs Gunpowder unit
+2 vs Standard building

The Condottiero (plural Condottieri) is the second unique unit of the Italians in Age of Empires II HD: The Forgotten. A quick anti-gunpowder infantry unit, it can be trained at the Barracks upon reaching the Imperial Age. In The Forgotten, a Castle was also required in order to train Condottieri. This requirement was removed in The African Kingdoms.

As a team bonus, the Condottiero is a shared unique unit, available to any players allied with an Italian player. It has no Elite version, unlike the Berbers' secondary unique unit, the Genitour.

The Condottiero has a large attack bonus against gunpowder units, and bonus armor which negates their anti-infantry damage. Thus, Condottieri are an effective counter for armies of Janissaries, Conquistadors, or Hand Cannoneers. In addition, Condottieri trade effectively against Halberdiers and Camel Riders, which are common auxiliary forces to protect gunpowder units and take down cavalry.

Condottieri move fast and have high hit points. They are also created quite quickly and do not need to be upgraded. Their comparatively high gold cost, however, makes them an expensive unit to field and sustain in the long run. Skirmishers are much more efficient at dealing with gunpowder units on a cost basis; also, siege units excel in general combat, which limits the Condottiero's use to an emergency counter to gunpowder.

Condottieri can be used as an expensive substitute for Champions. This can occur in situations where the player does not have the Champion upgrade at the ready or if the player's civilization does not have access to them (Tatars, Bulgarians, Ethiopians, Huns, Khmer, Malay, Mayans, and Persians). On the other hand, Condottieri can be a huge power spike during early Imperial Age, though as already mentioned, they are less and less cost efficient as time goes on.

For the specific case of the Malay and Bulgarians, Two-Handed Swordsmen should not be substituted, but rather supplemented with Condottieri, forming a solid composition in late Imperial Age, with Condottieri chasing down archers and gunpowder units, using their superior speed. Halberdiers and Karambit Warriors can also be very good complements or alternatives, depending on the situation.

Even for civilizations that have access to great Champions, substituting them when enemies use many anti-infantry units should be considered. For example, an interesting play would be to couple Malian Condottieri with Gbetos, both possessing great mobility to raid enemy positions and supplement each other's weaknesses; Gbetos add firepower, whereas Malian Condottieri are tasked with shielding Gbetos against enemy ranged units. Although in more general situations, Skirmishers would be more cost-effective, since they effectively counters all gunpowder units (except siege) as well as the Arbalester, to which the Condottiero has little defense with no base pierce armor.

A practical, general example would be a scenario where the player has previously built several Barracks to train Pikemen or Halberdiers against a cavalry civilization, and in this case, the opponent has chosen Hand Cannoneer as counter versus Pikes. In this instance, if the player can afford the gold cost but is unable to train Skirmishers right away, training some Condottieri in order to diversify and gain a slight edge in battle is recommended, taking advantage of the Condottiero's beefier stats. But as the player's gold starts draining out, Condottieri might be a dangerous choice for the player's economy, especially when the opponent can easily switch to other ranged units.

Finally, their ability to be trained without upgrades upon reaching the Imperial Age makes them a suitable counter to gunpowder in Fast Imperial games, especially in closed maps like Arena, where it is common that battles initially happen in groups of small but powerful units. Here, training just a few Condottieri to take down enemy Bombard Cannons can inflict a tremendous damage on the opponent. In other cases, the mere presence of an Italian player can be a strong deterrent against the creation of gunpowder units, in order to prevent a disastrous scenario.

The term Condottiero meant "contractor" in Renaissance Italian and was synonymous with the modern English title of Mercenary Captain.

Historically, the Italian Condottieri were the leaders (or warlords) of the professional, military free companies (or mercenaries) contracted by the Italian city-states and the Papacy, from the late Middle Ages and throughout the Renaissance. Although in-game Condottieri fight on foot, historical Condottieri fought mainly on horseback, as the troops they commanded consisted mainly of heavily-armored, mounted men-at-arms. 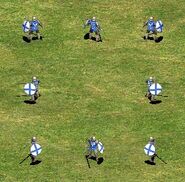 A group of Condottieri 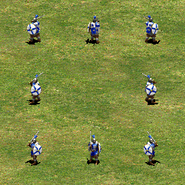 A group of Condottieri as of patch 4.4 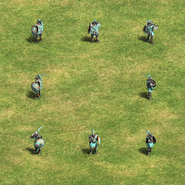 A group of Condottiero in the Definitive Edition

Condottieri can be valuable for civilizations that have no access to the full Militia line (e.g. Persians).

A couple of Condottieri in the Definitive Edition

Condottiero in the HD Edition and Definitive Edition

Condottieri at Battle of Anghiari, from Rubens' copy of a lost painting by da Vinci