Improved Bowman
Composite Bowman is a unit in Age of Empires. It is an upgrade of the Improved Bowman. They are one of the Bronze Age's most cost effective units as they only require half the resources of a Chariot Archer.

The * indicates that the civilization can fully upgrade their Composite Bowmen, i.e. gets Chain Mail Archers, Craftsmanship, Ballistics, and Alchemy.


The ^ indicates that the civilization has at least one civilization bonus that benefits the combat strength of the Composite Bowman.

However, in Deathmatch games, civilizations that can train Cataphracts, or powerful siege weapons such as the Heavy Catapult or Helepolis, can make short work of them due to their fragility.

The Minoans have an additional 2 range for their Composite Bowmen, allowing them to strike before other archers and out-range towers. They can therefore continue using them effectively in the Iron Age and in Deathmatches. 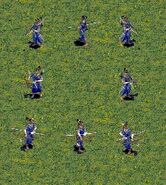 A group of Composite Bowmen.

A group of Composite Bowmen attacking an enemy Storage Pit. 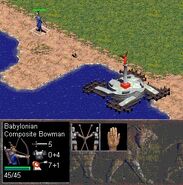 Composite Bowman in-game and infobox comparison. Even though the two illustrations show the Composite Bowman firing southeast, his in game counterpart does not imitate his pose on the infobox. 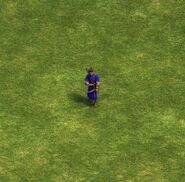 A Composite Bowman in the Definitive Edition
Community content is available under CC-BY-SA unless otherwise noted.
Advertisement