Age of Empires Series Wiki
Register
Don't have an account?
Sign In
Advertisement
in: Age of Empires III, Outlaws, Gunpowder cavalry,
and 3 more

The Comanchero is a mounted outlaw with a pistol. At 120 coin and 7 population (5 with the "Dance Hall" or "Atonement" Home City Card), it is the most expensive outlaw unit. Compared to standard Dragoons, which share the similar multipliers, Comancheros are slightly more durable, but have less firepower. Like other outlaws, Comancheros are most useful in the Commerce Age and depreciate in value as the game progresses, as upgraded standard light cavalry (and proper mercenaries) will outclass them.

The Lakota are the only civilization to have the option of shipping them from the Home City. However, Comancheros are not useful for raiding due to their reductive multiplier; therefore, a regular shipment of 4 Axe Riders will likely have a greater effect on the game, or even coin shipments to train Bow Riders, which have no such penalty against villagers.

In the Definitive Edition, certain revolutionary nations have access to modified Comancheros. All of them can build Livestock Pens, train Cows, and gather food from livestock. They can be trained at not only the Tavern, but also Stables, Forts, and Galleons for different amounts of food (instead of 120 coin) and use up 1 population.

3.0
The Bandit Rider (Outlaw Rider before update 38254) is the Treasure Guardian version of the Comanchero, usually found in large or resourceful treasures. The Bandit Rider has much higher hit points but more vulnerable to cavalry and artillery. However, they are better at dealing with villagers, so they are recommended to be used in raiding.

Spanish and Portuguese can get 10 Bandit Riders along with Bandit Gunslingers through revolution by selecting Miguel Hidalgo. If one has a War Chief, one should not use it on him for fighting other treasure guardians, but use him as ranged cavalry.

An outline of a "heroic" Comanchero 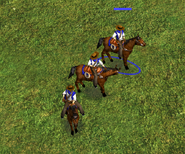