The Comanche Horse Archer is a ranged cavalry native warrior in Age of Empires III that can be trained at a Trading Post built on a Comanche settlement.

The Comanche Horse Archer is similar to the European Dragoon, but more cost effective and combat proficient against enemy hand cavalry due to its melee resistance. However, it is vulnerable to ranged infantry.

"It is thought that the Comanche split off from the Shoshone and moved onto the Great Plains and south into Texas in pursuit of horses. After its introduction by the Spanish, the horse became an integral part of Comanche life. A man would spend much of his life astride a horse, and his family's wealth was measured in horses. The Comanche people successfully defended their lands from European settlers for almost a 100 years, fighting off wave after wave of settlers. They fought and hunted from horseback with short bows, lances, and buffalo hide shields." 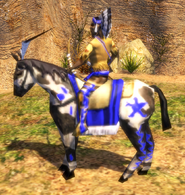 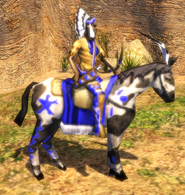 Side view of the Comanche Horse Archer model
Add a photo to this gallery
Retrieved from "https://ageofempires.fandom.com/wiki/Comanche_Horse_Archer?oldid=266178"
Community content is available under CC-BY-SA unless otherwise noted.