The Comanche are a Native American tribe in Age of Empires III. Like all natives, they can be allied with by building a Trading Post at their Trading Post site.

The Comanche language is a Numic language of the Uto-Aztecan family.

"Before European contact, the Comanche were part of the Shoshone tribe living along the Platte River in eastern Wyoming. They acquired the horse in the late seventeenth century and thereafter began migrating to the southwest as a separate tribe. They eventually established effective control over a wide area stretching from western Oklahoma, across the Texas Panhandle, and into New Mexico. This area was known as the Comancheria.

They became the expert horsemen of the southern plains and were very skilled with the lance, bow, and arrow. Their population grew because hunting buffalo from horseback provided a dependable food supply. They built up huge herds of horses through breeding and capture, and particularly prized the pintos and painted horses. They built a reputation as fierce and pitiless warriors, fighting both as raiders and as defenders of their stock.

For much of the eighteenth century the Comanche waged war against neighboring tribes, especially the Apaches, and the Spanish based in Santa Fe, Texas, and Mexico. When Americans moved into Texas, the Comanches got into conflict with them. A series of treaties were signed with the Republic of Texas, the United States, and the Confederate States, but the whites could not stop settler encroachment, which always led to more fighting. Gradually the Comanche were devastated by disease and worn down by military action. They were placed on a reservation, but eventually most of that was taken away and opened to white settlers." 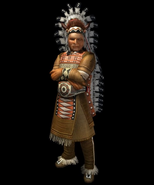 Comanche concept art
Add a photo to this gallery
Retrieved from "https://ageofempires.fandom.com/wiki/Comanche?oldid=261186"
Community content is available under CC-BY-SA unless otherwise noted.