0 feet
The Colossus is a myth unit in Age of Mythology available to the Greeks in the Mythic Age if they worship Hephaestus.

The Colossus can be upgraded by the Hand of Talos and Shoulder of Talos technologies, each of which increases the Colossus' maximum health by a large amount. It can regenerate by eating trees or gold mines. This can be a useful strategy provided the Colossus eats a gold mine or tree belonging to the enemy.

The Colossus is a powerful myth unit and is very strong against buildings due to its high crush attack. It is also strong against almost anything else, but is the most effective if it is put to use against buildings or regular human soldiers. When fully-upgraded prior to the Extended Edition, it had the highest HP of all non-Titan, trainable Myth Units (tied with that of a Mountain Giant that has been upgraded with Granite Blood, although the Colossus is still more durable due to its higher armor ratings), but this is balanced by the Colossus being the slowest Myth Unit in the game. As with all Myth Units, Heroes will defeat them (Colossi can actually defeat most non-Greek heroes one-on-one, but they will still take much more damage than what they deal and will also usually be outnumbered), though the durability of the Colossi means they'll usually survive until backup arrives. The Colossi's slow speed tends to make them a target of Medusae, Mummies, Frost Giants, Arguses, and Lampades, all which can either instantly kill it, put it out of action, or even turn it against their allies.

The Great Colossus at Rhodes was one of the Seven Wonders of the Ancient World. It stood over 150 ft. high on a 50 ft. white marble base. It was mostly hollow, with a skin of bronze welded to a skeleton frame of stone and metal. Though it was destroyed by an earthquake after standing for only about fifty years, such was its enormity that people came to Rhodes just to see its ruins, just as people today visit the ruins of other Greek monuments, buildings and temples. 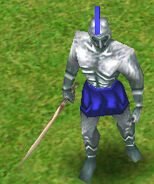 Colossus pre-release render.
Add a photo to this gallery
Retrieved from "https://ageofempires.fandom.com/wiki/Colossus?oldid=262192"
Community content is available under CC-BY-SA unless otherwise noted.