how do you turn this on

12
The Cobra Car (formerly known as Shelby Cobra, simply titled COBRA in the original game) is a cheat unit in Age of Empires II. It is an AC Cobra that fires rounds of bullets at its targets. It is also available in the Scenario Editor.

Rather than utilizing explosive weapons in combat like its predecessor, the Cobra behaves much like a very rapidly-firing Hand Cannoneer. However, the Cobra has a tendency to harm friendly units caught within its blast radius.

The Cobra has a very impressive range of 10 that can hardly be matched by any other ranged attacker in the game, allowing it to pummel incoming hostiles with ease, though Towers, Castles or British Longbowmen can outrange it. Still, due to its high hit points, armor, and damage output, the Cobra Car easily mows down armies of Longbowmen.

A fatal weakness of Cobras is their poor AI, relying heavily on proper and constant micromanagement in order to protect them from damage and destruction during a raid, not from the enemy but from themselves. For some reason, shots fired from the Cobras can deal high damage towards friendlies who wander into their line of fire (including other Cobras). Because of this, clusters of these cars huddling up trying to tear down a fortified structure such as a Castle or Wonder can accidentally fire over and destroy each other's very quickly.

Due to the Shelby Cobra being classified as a siege weapon, all technologies that enhance Siege Workshop units also benefits this unit. However, despite being also a gunpowder unit, it is not affected by unique technologies and civilization bonuses that benefit gunpowder units.

When ordered to move 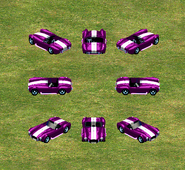 A group of Cobra Cars 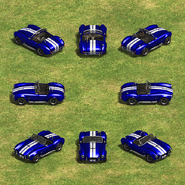 A group of Cobra Cars in the Definitive Edition 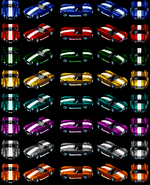 Spritesheet of the Cobra car