Battle Axe
The Clubman is an infantry unit in Age of Empires that can be trained at the Barracks. It is the first and most basic infantry unit and the only military unit trainable in the Stone Age. Researching Battle Axe upgrades Clubmen to Axemen.

Clubmen are available to all civilizations.

The Clubman is the first and weakest infantry unit available and should therefore be upgraded to the Axeman as soon as possible in the Tool Age, as Clubmen become virtually useless in that Age. Many players use Clubmen for exploring the map during the Stone Age.

"The first soldiers were local people called up for military duty in times of emergency. These temporary soldiers were commonly armed with any weapon used for hunting game and other wildlife. A common development of these weapons were wooden spears and large pieces of wood or bone. These tools were easily made since they could be crafted very easily and were an extension of weapons already used for hunting and gathering. Early troops that used these weapons were effective and needed minimum training. The club itself had very little practical use other than for combat against other humans since it was too slow and cumbersome to hunt game. These early fighters eventually became obsolete following the Neolithic Revolution, as better tools and toolworking became available. Some of these improvements included improved stoneworking and woodworking, and later the introduction of more advanced metal weapons made from bronze."
—Age of Empires manual

A group of Clubmen 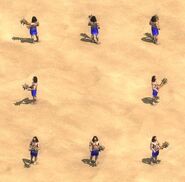 A Clubman in the Definitive Edition
Add a photo to this gallery
Retrieved from "https://ageofempires.fandom.com/wiki/Clubman?oldid=276227"
Community content is available under CC-BY-SA unless otherwise noted.