The Circle of Ossus is a fictional secret cult featured throughout the original campaigns of Age of Empires III as the main antagonists to the Black family. The Circle's goal is assert power, obtain eternal life, and riches in the New World.

The Circle of Ossus has enclaves in Britain, Russia, Prague, Alexandria and Spain. In addition, they possessed a library made of stone in Malta's caves and also held territory near Havana, Cuba, the site of the Ossuary. The battles for the Lake of the Moon took place in the Americas.

The Circle had a strong military, made of forces from the powerful countries of Europe. The core army of the Circle is mainly German, using Uhlans and Doppelsoldners with Crossbowmen and Pikemen but also adopting other units such as Cavalry Archer Scouts in the Andes, British Musketeers and Longbowmen around Warwick's leadership and Lancers that were used in the attack against the Incas. At Acts 2-3, the Circle acquires a secondary Russian Army that serves them at several times. They had their own elite troops, called the Boneguard. They had also tamed white animals, including Jaguars, Wolves, and Cougars, which are featured in the library of stone.

As Pierre Beaumont, an army leader was called Grand Inquisitor, others would presumably have the same title.

Alain Magnan - Alain led a double life, being a commander of the Circle and also the Knights of St. John. He tasked Morgan Black with defending a fort in the Siege of Malta, attacking an Ottoman fortress in the New World, and taking a Spanish treasure fleet. He ordered Morgan to kill the Turkish general Sahin, Elisabet Ramsey - a pirate who Morgan seemed to have an affection for - and an Inca soldier, which made Black realize the truth, and he was persuaded to destroy the fabled Fountain of Youth. Alain was killed during the battle.

Warwick - the British lord was sent to control a colony, but then kidnapped Stuart Black. John Black hunted Warwick for his uncle Stuart, and on the way Warwick became a renegade for attacking a village without authorization and was pursued by the British military. His Boneguard troops led the way for a Russian army to attack the French and British colonies. The Russian army and Warwick were destroyed when John Black sacrificed himself by causing an avalanche in the mountains.

Pierre Beaumont - he fooled Amelia Black into thinking that he was a prospector looking for workers whom he'd share the gold in his mines with, then tried to kill her. His plans were scuppered when the aging Kanyenke warned Amelia, who almost fell into the trap. The United States army destroyed several Circle bases, until finally, at the Ossuary in Havana, Amelia shot Beaumont in a last stand battle and soon the siege destroyed the Circle for good.

The Boneguard are the Circle's elite troops. 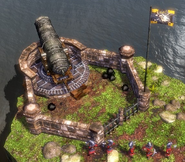 An Boneguard Musketeer with Warwick on Campaign loading screen.

The Fixed Gun that protects The Fountain of Youth

Ossuary, the stronghold of the Circle of Ossus in Havana