Europeans except Ottomans and Italians

The Church is an economic building in Age of Empires III that is available once the Commerce Age is reached. It trains healers such as Priests or Missionaries, as well as Spies in The WarChiefs expansion, and provides technologies for the player's colony as well as unique improvements for each civilization that requires a certain Home City Card (see below) to be sent. It also generates 0.7 XP per second.

Instead of the Church, the Ottomans, United States, the Mexicans, and the Italians have the Mosque, Meeting House, the Cathedral, and the Basilica, respectively, which are identical in function with the Church (with the latter two buildings having unique abilities to their respective civilizations). The African civilizations have the Mountain Monastery and the University serving as its equivalent, respectively, with different technologies and improvements that are unique to their respective civilizations. However, they can both gain access to Churches and Mosques by allying with either the Jesuits for the Ethiopians or the Moroccans for the Hausa.

As for the Native American and Asian civilizations, they lack an equivalent building to the Church; although the Monastery is the Asian spiritual equivalent of the Church, it merely functions as a Tavern instead (however, it also provides an XP trickle, and can provide upgrades to improve Monks). The Japanese can build one Church through the Church Wagon shipment from the Consulate with Dutch relations.

Units with an asterisk (*) are added in The WarChiefs.
The Missionary replaces the Priest for the Spanish.
The Surgeon requires the Master Surgeon Home City Card to be trained at the Church.

Spanish Church in the Industrial/Imperial Age

German Church in the Colonial/Fortress Age

Russian Church in the Colonial/Fortress Age 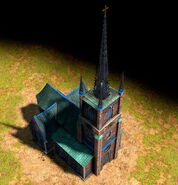 Swedish Church in the Colonial/Fortress Age 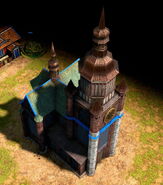 Swedish Church in the Industrial/Imperial Age