Age of Empires Series Wiki
Register
Don't have an account?
Sign In
Advertisement
in: Tale of the Dragon, Age of Mythology, Foot archers,
and 3 more

14 feet
The Chu Ko Nu is an archer used by the Chinese in Age of Mythology: Tale of the Dragon.

They carry repeating crossbows that fire two bolts at once. Due to this, they are excellent at dispersing groups of infantry. But the penalty for using two projectiles is that each arrow does less damage than the average archer and each one has a chance of missing their target. This makes the Chu Ko Nu especially vulnerable to attacks from fast moving units, especially cavalry. They are also more expensive than the Greek Toxotes but they share the same speed, armor stats, and damage output. There are also a handful of god bonuses and upgrades available to lower the cost of Chu Ko Nu.

The Chinese Chu Ko Nu repeating crossbow was known for its simple design and incredible rate of fire. It held a magazine of 10 bolts with steel tips, which it shot in succession, and was operated by grasping the stock in the left hand and working the lever with the right. In that swift movement, a bolt would drop into place, the string would be strung, and then the bolt would be fired, with another bolt dropping in to take its place. The weapon was specifically designed to fire rapidly and be turned on groups of enemy troops at a distance of no more than 150-250 feet. It was especially effective against cavalry. Horses provided large targets for the generally inaccurate Chu Ko Nu, and when the animal was wounded it usually lost control and sowed pandemonium in the surrounding ranks.

Stories of the Chu Ko Nu date back to 250 BCE, when legend has it that the first Chinese emperor Qin Shi Huang used the weapon to shoot sharks for sport. Most accounts, however, have the creation of the Chu Ko Nu occurring during the Chinese Han Dynasty, around the year 200 CE. 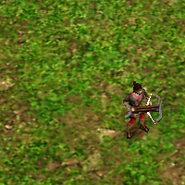