The Chu Ko Nu is the unique unit of the Chinese in Age of Empires II. It is an archer that fires multiple arrows in quick succession.

Only the first arrow does full damage, though. All the other arrows fired deal 3 pierce damage and 0 melee damage (the latter is very helpful when battling rams). A regular Chu Ko Nu fires three arrows per volley, and an Elite Chu Ko Nu fires five.

Chu Ko Nu can be upgraded to Elite Chu Ko Nu in the Imperial Age.

Chu Ko Nu are usually used in a combination with Monks as healers and Scorpions behind them along with some Villagers. They are great against most close combatant units, especially when facing War Elephants or Teutonic Knights. Chu Ko Nu also do very well when mixed with infantry. Another way to utilize Chu Ko Nu is to use them to protect Castles, both garrisoned and ungarrisoned. If garrisoned, 13 fully upgraded Elite Chu Ko Nu are enough for a Castle to fire all 20 extra arrows. If ungarrisoned, groups of Chu Ko Nu are a great deterrent against Rams, due to each arrow having a 0 melee attack, thus doing 3 damage per arrow against rams. They do not have the same effectiveness against Armored Elephants, however, since they can receive armor upgrades to negate their -2 melee armor.

The Chu Ko Nu, in a similar fashion to the Kipchaks, have the distinction of still faring fairly well against most anti-archer units. This is because most anti-archer units (such as Skirmishers) can survive archer fire due to their pierce armor. But due to the high number of arrows fired the Chu Ko Nu (especially Elite) still deals a considerable amount of damage, especially to Rams. However, they should still try to avoid anti-archer units in general and they match poorly against Huskarls and Ghulams. Most other archers have one more range than Chu Ko Nu and can hit-and-run them. Meanwhile, Chu Ko Nu are not good at hit-and-run due to how their multiple shots work in terms of reloading, and due to their long frame delay.

As Chu Ko Nu are unique to the Chinese, only technologies that are available to them are shown in the following table: 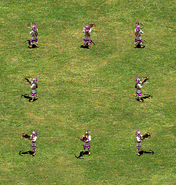 A group of Chu Ko Nu

The weapon of Chu Ko Nu 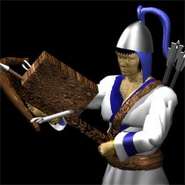 A render of the Chu Ko Nu model

Chu Ko Nu in the HD Edition and Definitive Edition