Age of Empires Series Wiki
Register
Don't have an account?
Sign In
Advertisement
in: Article stubs, Age of Empires III, Cavalry,
and 2 more

The Chinaco is a melee cavalry in Age of Empires III: Definitive Edition that is unique to the Mexicans. It is a lesser version of the Spanish Lancer that moves slightly faster, attacks from a short distance away, and quite effective against cavalry.

The Chinaco replaces the Hussar and is unique to the Mexicans. It is available starting in the Commerce Age, and like the Hussar, is effective against Light Infantry, but weak against Heavy Infantry and Light Cavalry. Chinacos have lower hit points than Hussars, but unlike Hussars, have multipliers on their damage output - making them more of a hard counter than a soft counter to the units against whom Heavy Cavalry excel. They also have a slightly longer range than other melee cavalry units, making it easier for them to attack their targets.

As Chinacos are unique to the Mexicans, only technologies that they have access to are shown in the following table:

As Chinacos are unique to the Mexicans, only their cards and other civilizations' TEAM cards are shown in the following tables:

Chinaco image from the Compendium section 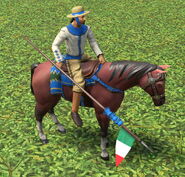 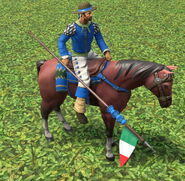 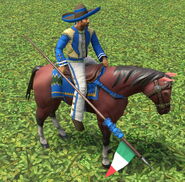 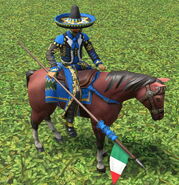