16 feet
The Chimera is a Mythic Age hybrid myth unit granted to worshipers of Artemis.

The powerful jaws of their lion head grants them a strong melee hack attack. Chimera possess a powerful special attack, whereby their snake tail lunges forward and spews fire over the enemy. This is an area of effect attack that damages many enemies at once. Due to the nature of their special attack and their general effectiveness against most types of unit, Chimera need little management in order to be effective.

The Chimera has bonus damage against myth units and is also strong against human units. However, they are easily slain by heroes.

The chimera is one of the varied offspring of Echidna (with the torso of a beautiful woman and a horrible serpent below the waist) and Typhon (a fire-breathing giant with 100 serpent heads). The Chimera is a fire-breathing beast, usually depicted with the body of a goat, the head of a lion, and the tail of a serpent. The Corinthian hero, Bellerophon, defeated the original Lycian (a Greek kingdom in Asia Minor) chimera by flying into battle on the winged horse, Pegasus. 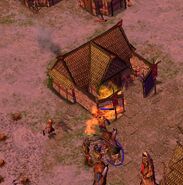 Chimera indirectly damaging a building adjacent to the unit being targeted by its special attack.

Wikipedia has an article about:
Chimera (mythology)
Community content is available under CC-BY-SA unless otherwise noted.
Advertisement