Age of Empires Series Wiki
Register
Don't have an account?
Sign In
Advertisement
in: Lakota, Age of Empires III, AI personalities, The WarChiefs

Chief Gall (1840 - 1894) is the AI personality of the Lakota (known as Sioux before the Definitive Edition) in Age of Empires III: The WarChiefs. He is voiced by Gregory Cruz.

Gall (c. 1840-1894) was a battle leader of the Hunkpapa Lakota in the war against the United States. He was one of the Lakota commanders in the Battle of Little Bighorn. Unlike other Lakota leaders like Sitting Bull and Crazy Horse, Gall died a peaceful death.

Gall's AI personality emphasizes military mobilisation over economic development, and he will use the Lakota as an early-game rushing faction. Gall will typically pour resources into large attacks throughout the Commerce Age onward, comprised of Cetan bows, Wakina Rifles, Rifle Riders, Bow Riders and Axe Riders with occasional war clubs and dog soldiers. These attacks will usually reduce Gall's resource intake, and cause the Lakota faction to advance to the fortress age more slowly than other AI-controlled factions.

Chief Gall will always try to maintain a sizeable military force. However his base tends to be very limited in terms of its size and defensive structures, so it can be easily ransacked once his army is beaten. 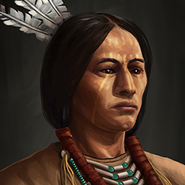 Wikipedia has an article about:
Gall (Native American leader)
Community content is available under CC-BY-SA unless otherwise noted.
Advertisement