Age of Empires Series Wiki
Register
Don't have an account?
Sign In
Advertisement
in: Cavalry, Age of Empires III, Commerce Age,
and 2 more

The Cheyenne Rider is a heavy cavalry native warrior in Age of Empires III: The WarChiefs that can be trained at a Trading Post built on a Cheyenne settlement which replaces the Lakota in the expansion, thus the Cheyenne Rider acts as a replacement to the Lakota Axe Rider.

The Cheyenne rider is less powerful than the Hussar, but more cost effective. It requires fewer total resources, and food and wood versus food and coin. With the Cheyenne Fury upgrade, the unit becomes better at countering enemy cavalry than the Hussar. In the Definitive Edition, They have multipliers against cavalry and shock infantry by default. This makes them the only heavy cavalry in the game with an attack bonus versus their adjacent units, which are cavalry and shock infantry. This bonus can be further increased by researching Cheyenne Fury. 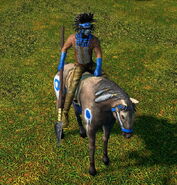