Tambo on a House of Wittelsbach palace

10 per House of Wittelsbach palace

The Chevauleger is a ranged cavalry native warrior in Age of Empires III: Definitive Edition - Knights of the Mediterranean that can be trained at a Trading Post built on a House of Wittelsbach palace.

Chevaulegers are ranged cavalry similar to the Dragoons. They have high speed and attack, with multipliers against heavy cavalry and hand shock infantry. In comparison with Dragoons, Chevaulegers have less ranged attack, slightly less speed, and cost more food, but have higher hit points and melee attack. Chevaulgers lack melee multipliers against artillery, but their increased melee attack makes them more effective against these units.

Like other light cavalry units, Chevaulegers can be countered by Skirmishers and archers. However, due to their increased hit points and melee attack, they can take down these units more easily, as long as they are not outnumbered, so it is recommended to combine them with melee cavalry units like Hussars.

The Chevauleger starts at Veteran level, giving it +20% hit points and attack.

The Indian Friendship card ships 3 Chevaulegers if the player had built a Trading Post on a House of Wittelsbach palace.

Chevauleger image from the Compendium section 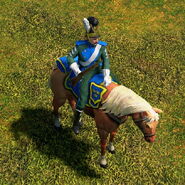 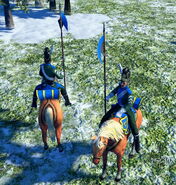