Age of Empires Series Wiki
Register
Don't have an account?
Sign In
Advertisement
in: Age of Mythology, Classical Age, Atlantean units,
and 3 more

20 feet
The Cheiroballista is a hand-operated Atlantean version of the Ballista, available in the Classical Age. It is an anti-infantry Siege Weapon that can mow down charging groups of infantry with ease but is less effective against buildings.

Kronos reduces wood and gold cost by 10% and increases movement speed by 10%.

Cheiroballistae have a large line of sight and range so they can take down melee units before they get too close. They are important in the Classical Age as they are the only anti-infantry unit available for the Atlanteans at that point in the game. Despite its classification as a Siege Weapon, it has no crush damage and is therefore ineffective against buildings. In addition, they are quite expensive and take up a large amount of population space. Furthermore, cavalry have enough speed to close the gap before taking too much damage and will take them down easily. They are usually obsolete by the Heroic Age as the Arcus can take over the role without being as expensive or occupying as many population slots. The only advantage of Cheiroballista late-game is when the Atlantean player is faced against a Norse player who is massing Huskarls.

Wikipedia has an article about:
Cheiroballistra

The unupgraded, Heavy and Champion Cheiroballista 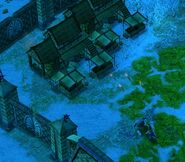 A Cheiroballista firing multiple projectiles at once.