Age of Empires Series Wiki
Register
Don't have an account?
Sign In
Advertisement
in: Age of Empires III, The WarChiefs, Black family,
and 3 more

Josh Keaton (original), Kalani Queypo (Definitive Edition)
Chayton Black is the main protagonist of Act II: Shadow campaign in Age of Empires III: The WarChiefs campaign. A prominent member of the Black family, he is the grandson of Nathaniel Black and son of Amelia Black, who had him with an unnamed Lakota husband, and the final owner of the Falcon Company.

Chayton is very close to his native roots, being half-Lakota, and is deeply concerned with the state of the land. The campaign sees Chayton questioning his own identity as he is torn between making money and protecting the innocent when a gold scandal erupts in the Black Hills of South Dakota.

Conflict between the Lakota and the US[]

Chayton Black is first seen in the campaign expanding the Falcon Company westward along the Bozeman Trail, but he winds up in the middle of Red Cloud's War with Fort Laramie quartermaster Billy Holme. Ten years later, he returns to the west to reunite with Holme, now a sheriff, who informs him of a huge amount of gold in the Black Hills of South Dakota. After defending local mining camps from Lakota attacks, Chayton goes to see Crazy Horse and establish a peace treaty. However, Holme and a large party of miners arrive and destroy the village, wrecking any chance of peace.

Chayton still sides with Holme, and defends his workers as they gather wood for a fort. Yet when he receives the order to destroy a Lakota village, he turns against Holme and, allying with the Lakota, destroys the fort. Chayton convinces General Custer, who has recently arrived in the area, to give him one day to find Holme. Once he dons Lakota clothing and red war paint, Chayton works with the Lakota to earn their trust and help him track down Holme. Inside Holme's hidden mine, Chayton tries to negotiate peace, but, just as Holme tries to kill him, Chayton draws his gun more quickly and shoots Holme. The sheriff stumbles backwards into some powder kegs and falls down a mine shaft to his explosive death.

Fighting for the Lakota[]

Failing to prevent General Custer from attacking at Little Bighorn, Chayton finally decides to wholly devote himself to the Lakota cause. On the day of the battle, Chayton is aided by four native chiefs: Crazy Horse, Chief Brave Wolf, Chief Bull Bear, and Chief Two Moon, all of whom help him kill Custer, forcing the U.S. armies to retreat.

When the Battle of Little Bighorn ends, Amelia Black states in the final cutscene that she never again saw Chayton but hears two rumors: either he died at Wounded Knee and it took twelve horsemen to kill him, or he lived on in the Black Hills and settled down with his wife and children. Chayton is last seen riding off with Crazy Horse as a pistol-toting U.S. soldier dies amid tall grass and a Crazy Horse monument is carved into a nearby mountain.

In the Definitive Edition of the game, several changes to Chayton's story have been made:

Like his grandfather Nathaniel Black, Chayton fights with dual-wielded revolvers and can use Hawk Eye and Eagle Eye; both of which are identical to the ones used by Nathaniel.

Like other heroes, Chayton has many hit points, but if he falls, he will collapse instead of dying and need to regenerate enough hit points to be rescued by allies. Similar to Explorers, he can collect treasures and build Trading Posts, but cannot build Town Centers.

Chayton Black as a unit

Another picture of Chayton Black with Lakota attire 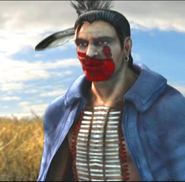