The Charminar Gate is a wonder in Age of Empires III: The Asian Dynasties that is unique to the Indians and can be built to advance into the next Age. It sends a shipment of Sowars or Mahout Lancers when built and can train Mansabdar units which enhances units of the same type (see below).

The Charminar Gate trains Mansabdar units which are more stalwart than their corresponding units and they have a passive ability that increase the hit points and attack of all nearby similar units, somewhat similar to the Japanese Daimyo, but Mansabdars themselves cannot train units or receive Home City shipments. They are enabled with proper Age; the Mansabdar Mahout Lancer cannot be trained until the player enters the Fortress Age. They typically have decorative uniforms and equipment, making it easy to distinguish them from normal units. Every Mansabdar unit only affects identical units and do not affect other non-related units (e.g. the Mansabdar Gurkha inspires all other Gurkhas and the Mansabdar Flail Elephant inspires other Flail Elephants).

All Mansabdar units cost twice as much as regular ones and train a little bit slower than a simple unit, making the Mansabdar units only available for players who mixed a good and productive economy with a powerful and hard-to-beat army. The most expensive units that the Indians can train are the Mansabdar elephants. However, the high cost of the Mansabdar units are compensated by their high combat stats and unique special abilities, helping the player achieve a conquest victory if the same player handles them very carefully and with intelligence.

The Mansabdar units are not upgradable to Disciplined, Honored or Exalted level, but they can receive some upgrades from arsenal technologies, Home City Cards shipments (such as TEAM cards from ally players) and some Native/Religious upgrades at the trading posts.

Note: The Urumi has its Mansabdar variant included with the Urumi Swordsmen Regiment Home City Card, but cannot be retrained at the Charminar Gate should it die. This is fixed in the Definitive Edition.

As the Charminar Gate is unique to the Indians, only technologies that they have access to are shown in the following table:

As the Charminar Gate is unique to the Indians, only their cards and other civilizations' TEAM cards are shown in the following tables: 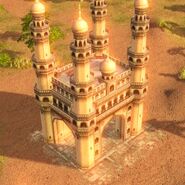 A photo of the real Charminar Gate located in Hyderabad, India

All the Mansabdar units lined in classification of elephants (top), camels (middle), and infantry (bottom)
Add a photo to this gallery
Retrieved from "https://ageofempires.fandom.com/wiki/Charminar_Gate?oldid=316472"
Community content is available under CC-BY-SA unless otherwise noted.