Wheel
The Chariot Archer is a powerful military unit in Age of Empires that combines the speed and mobility of the Chariot and the attack strength of the Improved Bowman. The Wheel technology is a prerequisite to upgrade before any Chariot units can be trained.

Note: Despite having access to all the other Chariot units, the Romans do not have access to the Chariot Archer.

The Chariot Archer is a popular Bronze Age unit because of its combined speed, strength, range of attack, and the fact that it costs no gold, which makes it a so-called trash unit. Its speed allows it to fly right past towers and catch Villagers quickly. It possesses 7 range, allowing it to find exposed units or for reconnaissance. As it is fast and has good range, it is strong in numbers.

The Chariot Archer also dealt triple damage against Priests and was highly resistant to conversion before update 38862. 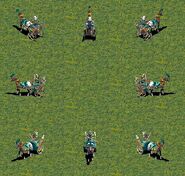 A group of Chariot Archers.

A duo of Chariot Archers.

A Chariot Archer in the Definitive Edition