The Champion is an infantry unit in Age of Empires II that can be trained at the Barracks once the Imperial Age is reached. It is the final tier in the Militia line.

The * indicates that the civilization can fully upgrade their Champions, i.e. gets Blast Furnace, Plate Mail Armor, and Squires. Faith and Heresy are not taken into account because they only contribute to their combat strength in a very situational manner.

The ^ indicates that the civilization has at least one civilization or team bonus or a unique technology that benefits the combat strength of the Champion.

The Champion is the first and only Barracks unit that provides its own melee protection: 1/1 armor. They have an attack bonus against buildings and the Eagle line, and are even more powerful when used in conjunction with Rams.

With additional armor for melee combat coupled with an attack rarely superseded by other infantry, the Champion is a good unit when complemented with other units (such as cavalry for tracking down ranged units, or siege units for faster razing) or in waves of units if the player has a massive replenishing stockpile of food and gold. The typical infantry shortcomings do exist, however, as they are still slow and are modest in terms of health, making them vulnerable to archers, heavy cavalry, and splash-damage siege weaponry.

Champions excel in two particular situations: early Imperial Age when their counters aren't as prominent and late Imperial Age when gold is scarce. Champions are informally called 'trash busters' since they can easily defeat all the trash units (Halberdiers, Elite Skirmishers, and Hussars). The unique trash units, the Genitours and the Magyar Huszar, can stand up to most civilizations' Champions, but do not defeat them distinctly.

For some civilizations, Champions are a go-to late game deathball choice. This includes Malians with their +3 pierce armor bonus and the Aztecs and Burmese with their additional attack damage. An Imperial Age Champion rush requires a huge Farm-based economy.

On lush maps with plenty of resources (e. g. Yucatán), it is recommended to opt for another type of army (as long as the additional cost can be shouldered by the economy), as they generally tend to fare better in general combat.

The Militia line, with the Champion on the right 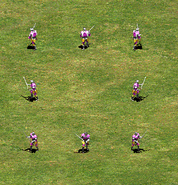 A group of Champions

Retrieved from "https://ageofempires.fandom.com/wiki/Champion?oldid=230252"
Community content is available under CC-BY-SA unless otherwise noted.