The Chakram Thrower is a unique unit of the Gurjaras in Age of Empires II: Definitive Edition - Dynasties of India, trained from the Castle. It is an infantry unit with ranged melee attack, and unleashes volleys of deadly metal discs. It is effective against groups of enemy units, as their chakrams cause damage to multiple units in a straight line, like the Scorpion.

With the Gurjaras' heavy focus on cavalry and camel units, Halberdiers and other infantry can become a problem for them to handle. Chakram Throwers are the Gurjaras' main answer to large groups of infantry, able to hit multiple targets in a line, akin to a Scorpion. They also perform well against Skirmishers, though Hussars are a bit more difficult to handle and should be dealt with via the Gurjaras' very strong Camel Riders.

However, the Chakram Thrower's maximum damage is actually quite low. Due to lacking Blast Furnace, an Elite Chakram Thrower can only attain up to 8 attack, so their damage is heavily reduced by melee armor. Anything that can reach 7 or more melee armor will make Chakram Throwers ineffective; examples include Teutonic Knights, Boyars, Serjeants, and Bulgarian Two-Handed Swordsmen with Bagains. Additionally, high HP units such as Battle Elephants or Paladins will easily withstand the damage that Chakram Throwers can put out. Their low damage also requires that Chakram Throwers be massed in order to be effective; small numbers of them will not deter a large group of infantry. Due to their relatively long creation time for a unique infantry unit, massing them can be difficult, especially if the Gurjaras lose any Castles.

Since they are ranged infantry, Arbalesters, Hand Cannoneers, and Slingers will make short work of Chakram Throwers. Additionally, due to Chakram Throwers only having up to 6 range (even though their projectile travels further than said range), Onagers and Scorpions will easily demolish them, though they take significant damage if the Chakram Throwers are able to hit them.

As Chakram Throwers are unique to the Gurjaras, only technologies that are available to them are shown in the following table:

The chakram is a throwing weapon from the Indian subcontinent. It is circular with a sharpened outer edge and a diameter of 12–30 centimetres (4.7–11.8 in). 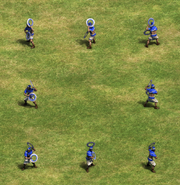