The Cetbang Cannon is a revolutionary artillery in Age of Empires III: Definitive Edition that is unique to Indonesia and can be trained at the Artillery Foundry, Fort, and Wokou Junk.

As Cetbang Cannons are unique to Indonesia, only technologies that their base European civilizations have access to are shown in the following table:

As Cetbang Cannons are unique to Indonesia, only their base European civilizations' cards and other civilizations' TEAM cards are shown in the following tables (for the base civilization, non-TEAM cards will only be applied if they are sent before revolting):

Depending from which civilization Indonesia revolted from, the Cetbang Cannon uses either Dutch or Portuguese Falconet's dialogue files.

First used by the Majapahit Empire, the cetbang, derived from the Chinese word chongtong, is a piece of light artillery which are found in two types: Eastern-style and Western-style. Eastern-style cetbangs are loaded from the front, typically fire arrow-shaped projectiles, sometimes tipped with explosive or incendiary, and are usually found in fixed mounts on ships or emplacements. On the other hand, Western-style cetbangs are loaded from the breech, fires round projectiles including "case" shots, and are light enough to be man-portable or mounted on swivels or carriages. 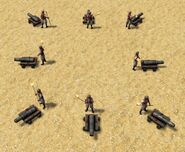 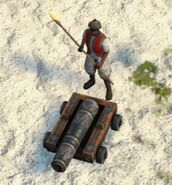 The Cetbang Cannon fires round shots
Community content is available under CC-BY-SA unless otherwise noted.
Advertisement