Rampage
Cerberus is the eighth scenario of The New Atlantis campaign in Age of Mythology: The Titans. The main objective is to defeat the Titan attacking Egypt.

The Titan Cerberus has arrived in an Egyptian City and begins to wreak havoc. By casting meteors onto a pyramid, it reveals a gate to the Underworld from which numerous Myth Units begin to spawn under its command. Meanwhile, Amanra, Ajax and Kastor find a Son of Osiris working on reviving the Guardian who should be able to defeat the Titan.

Every first few second counts in this scenario so players should first pull back the Son of Osiris for the time being as the scenario will be lost if he is killed. Instead, the campaign heroes, the Oracle hero, the Axemen, the Hyena of Set and Priests should be brought to the Guardian’s position to push back the imminent enemy attacks (the Son of Osiris can still attack but must stay out of reach). Amanra will quickly note that there is no Gold to mine so they will need to locate Camel Caravans around the map and send them to Sebennytos’ Town Center. The fast-moving Chariot Archers can be sent to quickly locate the Camel Caravans at the following six locations:

Oranos’ Followers will mostly send a variety of human soldiers while the Underworld Spawn player will send Myth Units to the Guardian’s location. Additional Priests can be trained from the Town Center and Temples to defend against both types of attacks as they deal bonus damage to Myth Units and the human soldiers have low defenses. Kastor and Ajax should stand in front as their special attacks are enough to instantly kill un-upgraded human soldiers (including the horseback riding Turma). At the same time, more Laborers should be trained to maintain the economy and construct buildings. Both enemies will attempt to sneak into the player’s base via the paths between the cliffs located between the bases of Amanra’s forces and Sebennytos. While searching for the Camels, Laborers must build Walls in the passes leading to the base to slow down the attacks (while making sure to create gates to enable the Camels to enter the city). As soon as they are finished, the Laborers must pull back as they risk being attacked by Tartarian Spawns who can leap over Walls. If one of the Walls is breached, Plague of Serpents or Ancestors can be cast to stall the enemy until heroes can be sent to defend. Once the passes are walled off, they can be upgraded to Stone Walls and even further if resources permit. Once a good defense has been established, players can queue production of Priest and send them by the Guardian while the Son of Osiris resumes reawakening it. Other Priests should be trained to guard the walled passes.

Monuments must be built to generate Favor needed to research Nephthys’ technologies that strengthen Priests. Also, a Migdol Stronghold must be constructed near the Guardian for protection as the attacks will continue throughout the scenario. While the Myth Unit attacks will gradually become less frequent, Oranos’ followers will begin sending larger armies of soldiers. What makes this enemy especially dangerous is that they receive a 10% movement speed boost thanks to Oranos’ bonuses. They can also cast the Shockwave god power to scatter and stun the player’s units.

The player can save resources need to advance to the Mythic Age; if they do, either minor god can be worshiped but Thoth does provide the Book of Thoth technology that will allow Laborers to gather resources faster. They can then cast Vision on the Followers of Oranos’ base and cast either Meteor or Tornado on their unit production buildings to slow down their attacks (this may not be possible if they choose to worship Theia as they can cast Hesperides to block God Powers). Advancing will also enable the player to research Coinage at the Market which will increase the speed of the Caravans. Once Oranos’ Followers advance to the Heroic Age, they will begin training armies of Contarius. Players may choose to build Barracks to train Spearmen, who are cheap and will do bonus damage against those or even Camelry and War Elephants from the Migdol Stronghold they already built. However, Priests can just as easily handle them as they can constantly heal one another and Contarius have very low defenses. The Animals of Set who appeared at the Temple can be sent to assist the Priests in defending the Son of Osiris.

The remainder of the scenario consists of playing on the defensive until the Guardian awakes. It is best to keep queuing units until the population limit is reached. Houses should also be built to increase that limit while an Armory will be needed to improve all existing units. If the Titan begins moving towards Amanra’s Forces before the Guardian is awake, players can send lone Priests to distract it or lure it away. When the Guardian does wake up, it can simply be sent straight to the Titan to attack it. Once the Titan is dead, the player will be rewarded with victory.

It is possible to win the scenario without using the Guardian. Players may ignore the Guardian altogether and focus on their defenses and economy. As Cerberus lacks the ability to regenerate at high speed, it can simply be defeated by a large army of Priests (though they should still be wary of other enemy soldiers who will intervene). As long as the Titan has been eliminated, the player will win the game even if the Guardian has not yet been revived. 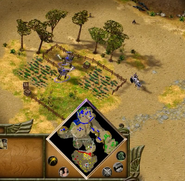 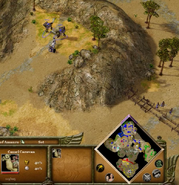 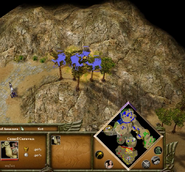 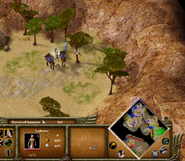 On harder difficulty settings, it is imperative that the Son of Osiris must leave the Guardian and stay on the defensive, despite Amanra's protest.

Building a Migol Stronghold and some Towers along the middle pass is crucial, especially on Titan difficulty. Also, the Son of Osiris is vital on defending this area.

Winning the game without reviving the Guardian

After a few minutes in a game, the player may train additional Camel Caravans from the Market
Add a photo to this gallery
Retrieved from "https://ageofempires.fandom.com/wiki/Cerberus?oldid=253734"
Community content is available under CC-BY-SA unless otherwise noted.