5
The Centurion is an untrainable heavy cavalry unit introduced in Age of Empires II HD: The Forgotten. It appears in some campaign scenarios and is available in the Scenario Editor.

The Centurion's appearance in The Forgotten is identical to a Cataphract, except for the helmet, which is taken from the Legion in Age of Empires. Its stats are equal to those of an Elite Cataphract.

In the Definitive Edition, Centurions have a unique and less anachronistic appearance based on Late Roman Cataphracts (but different from the game's Cataphract trained by the Byzantines), with golden horse armor, cape, ridge helmet, and a round shield with the Chi Rho symbol. The Definitive Edition version of Belisarius also has this appearance.

Since Update 42848, Centurions appear in the Battle Royale game mode, acting as Guardians of buildings. Higher numbers of Guardians appear near Castles.

The Centurions appear in some scenarios of the Alaric and Bari campaigns of The Forgotten, always under the command of AI players (the Romans and Melus, respectively).

In the Definitive Edition, Centurions replace the Western Roman Empire's spawned Elite Cataphracts at the end of the Attila the Hun campaign's fourth scenario, A Barbarian Betrothal. They are also included in several scenarios of the reworked Alaric campaign, like Razing Hellas (as part of the Eastern Roman Empire's forces), The Belly of the Beast (in Ravenna, with one representing Emperor Honorius), and The Giant Falls (as part of the Imperial Legions in Rome). 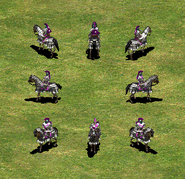 A group of Centurions 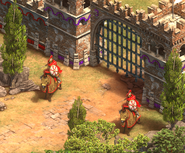 Centurions in the Definitive Edition

Centurion Guardians in the Battle Royale game mode.
Add a photo to this gallery

Retrieved from "https://ageofempires.fandom.com/wiki/Centurion_(Age_of_Empires_II)?oldid=313084"
Community content is available under CC-BY-SA unless otherwise noted.