Age of Empires Series Wiki
Register
Don't have an account?
Sign In
Advertisement
in: Age of Mythology, Cavalry, Lists

Cavalry units in Age of Mythology are mounted soldiers that fight in close combat with enemies, and are hence distinguished from infantry and archers. Cavalrymen are also human units, rather than the superhuman heroes or monstrous myth units. Counter-cavalry units gain a bonus against all the cavalry listed below. There are also a few units that are mounted but not considered cavalry for game purposes.

Raiding Cavalry are available at the Longhouse, whereas Jarls are trained at the Hill Fort.

Contarii are available at the Military Barracks.

Scout Cavalry, Mounted Archers, and Cataphracts are available at the Stable, whereas Generals and War Chariots can be trained at the Castle. The Chinese have the broadest variety of cavalry units in the game.

Units that were cut, and or removed before release, along with a couple of existing, but non-trainable cavalry units:

Some details worth mentioning: 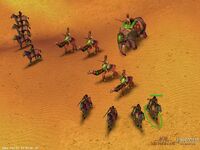 An Egyptian cavalry force, including a War Elephant.
Community content is available under CC-BY-SA unless otherwise noted.
Advertisement