The Cavalry Archer is a mounted archer in Age of Empires III that replaces the Dragoon for the Ottomans and Russians. It can be trained at the Stable, Fort, and Galleon upon reaching the Fortress Age.

Cavalry Archers are a cheaper version of Dragoons, costing far less coin, and only slightly more food. They deal only slightly more than half the damage of a Dragoon per shot, but fire twice as fast, making their damage per second higher, despite their lower cost. They also move slower than a Dragoon and have a 0.61 second animation delay compared to the 0.43 of a Dragoon, meaning they are significantly less effective at hit-and-run tactics. They resist 30% melee damage as well as having more hit points, so they are more capable of fighting against some hand infantry and can take some of them down with them, though it is still not recommended to attack any hand infantry with them. The higher DPS and hit points, and high melee resist, also mean that they are much better at tanking hand cavalry attacks. They have multipliers against artillery, as well as heavy cavalry, and paired with their high hit points, they can easily take down artillery. Normally ranged cavalry do half damage to villagers, but the Ottomans' Irregulars Home City Card allow them to gain an attack bonus against villagers instead, making them an effective unit for slowing down the enemy's economy. They can also be used to lure enemies into a trap using guerilla tactics.

The Cavalry Archer starts at the Veteran level, giving them +20% hit points and attack.

If they are made available in the Commerce Age with the "TEAM Early Dragoons" Home City Card, Cavalry Archers will be automatically upgraded to Veteran once the player reaches the Fortress Age.

2.0
The Wallachian Horse Archer is a variant of the Cavalry Archer unique to Romania, which fires 33% faster and have 10% more speed, but has 33% less hit points.

Since the Cavalry Archer is only available to Ottomans and Russians, all of the cards shown above are only relevant to them. 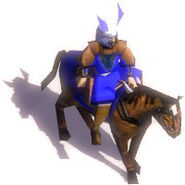 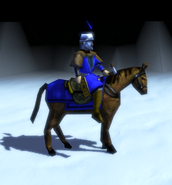 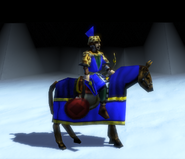 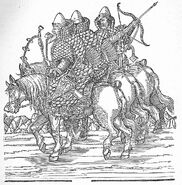