The Cavalry Archer is a mounted archer unit in Age of Empires II that can be trained at the Archery Range once the Castle Age is reached. Its high speed and ranged attack make it an excellent harasser, hit-and-runner, and a good counter for infantry units. With enough micromanagement, a small force of Cavalry Archers can take out whole contingents of foot-soldiers. However, they are hindered somewhat by their high frame delay. Their armor gets upgraded through the archer line but in terms of attack bonus against them they count as both archers and cavalry.

Cavalry Archers are available to all civilizations except for the Aztecs, Bohemians, Incas, and Mayans.

Cavalry Archers are one of the best harassers of the game. When attacking with Cavalry Archers the player must always micromanage them properly in order to maintain distance from the enemy targets. Tactics that employ these units require a large amount of resources since these units work way better if used in large numbers. Cavalry Archers are an excellent way to deal with slow moving melee units like most infantry. 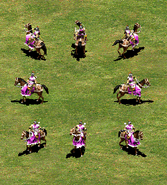 A group of Cavalry Archers

A couple of Cavalry Archers in the Definitive Edition 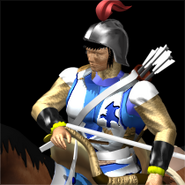 A render of the Cavalry Archer model