All Cavalry deals a +5 damage bonus against all melee infantry units except for Academy units. It can be upgraded in the Iron Age to Heavy Cavalry and Cataphract. This unit is available to most civilizations, with the exception of the Egyptians and the Sumerians. They are a good base for an early raiding army, but become quickly obsolete with Iron Age technologies. 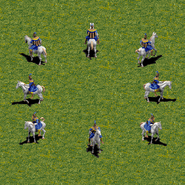 Cavalry in the Definitive Edition
Add a photo to this gallery
Retrieved from "https://ageofempires.fandom.com/wiki/Cavalry_(Age_of_Empires)?oldid=238985"
Community content is available under CC-BY-SA unless otherwise noted.