The Cavalier is a heavy cavalry unit in Age of Empires II that can be trained at the Stable once the Imperial Age is reached. The Cavalier builds on the strengths of its predecessor, the Knight, with a 20% increase in both attack and hit points.

Cavaliers are available to all civilizations except for the Aztecs, Bengalis, Dravidians, Gurjaras, Incas, Hindustanis, Mayans, and Saracens.

Cavaliers are a powerful and versatile addition to almost any army composition. Their high attack and speed make them great for raiding and flanking, coupled with high hit points and damage resistance to provide a perfect meatshield for ranged units and siege on the frontline.

Also suffering from the same pitfalls as the Knight, Cavaliers are hard-countered by Halberdiers and Camel Riders, vulnerable to conversion by Monks and can be overwhelmed by massed archers (if used in small numbers).

Although some civilizations can upgrade to Paladins, the Cavalier is often a more cost effective choice; especially in 1v1 matches where the supply of gold is limited. If the player's army composition is not weighted towards heavy cavalry, Cavaliers with Bloodlines and Plate Barding Armor should suffice.

Some civilizations that lack the Paladin upgrade have either a civilization bonus or unique technology that improves the combat strength or cost effectiveness: the Portuguese Cavalier costs -20% gold and the upgrade, as well the Blacksmith upgrades affecting them, are researched 30% faster, being able to be deployed and upgraded in a reasonable time. The Berber Cavalier is 20% cheaper, which helps create a large number of them. Despite lacking Plate Barding Armor, the Poles can get Cavaliers costing only 30 gold with the Szlachta Privileges technology, essentially making them a viable option when gold starts to run out and still allowing them to overwhelm enemies in melee combat. The Burmese Cavalier gets extra attack against archers by researching Manipur Cavalry, making it a strong counter to archer units (and compensating for the Burmese having some of the worst Skirmishers in the game). The Malian Cavalier, despite lacking Blast Furnace, gets +5 attack by researching Farimba, which puts them at the second strongest Cavalier in melee combat (it gets one more attack than a fully upgraded generic Paladin). The Bulgarian Cavalier attacks 33% faster, thanks to Stirrups, making it the strongest Cavalier in melee combat and giving it the highest potential damage per second among the cavalry units in the game (excluding elephants), even outperforming Lithuanian Paladins with 4 Relics collected (11.85 vs 10.53). The Sicilian Cavalier is very special, since it absorbs 50% of incoming bonus damage, can get higher conversion resistance and +1/+1 armor more than a Paladin, thanks to the First Crusade and Hauberk technologies respectively, making it the best against the regular counters of Cavalry (Monks, Halberdiers and Heavy Camel Riders) and much better against Archers and in raiding. However, it has an advantage of +1 melee armor only in melee combat, which does not mean much. Hence, both Malian and Bulgarian Cavaliers perform similar in melee combat to generic Paladins while being cheaper to upgrade and sharing the effect with other Cavalry units as well, and Sicilian Cavaliers perform similar to generic Paladins against Archers and in raiding.

Among Paladin civilizations, the Burgundians are a particular case, as they can research the Cavalier upgrade in the Castle Age and also being 50% cheaper, but lack Bloodlines, which can be a really useful power-spike for early Castle Age, while also allowing an easy transition to the Paladin in the early Imperial Age. The Teuton Cavalier gets +2 melee armor and conversion resistance naturally, making it a force to be reckoned with, with the only drawback being missing Husbandry. The Lithuanian Cavalier is not really special out-of-the-box since it lacks Blast Furnace, but it can more than make up for the loss with extra attack (upto +4) by collecting relics. The Cuman Cavalier is also good by getting a 15% movement speed bonus over the Teuton Cavalier, or being 5% faster than generic Cavaliers. While the bonus looks small, this allows Cuman Cavaliers to chase down Trade Carts in a pinch, while also enabling them to flee from unfavourable matchups.

The Knight line, with the Cavalier in the middle 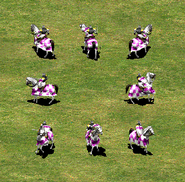 A group of Cavaliers 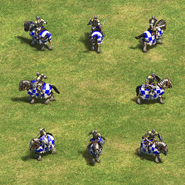 A group of Cavaliers in the Definitive Edition

Cavaliers providing a meatshield for Arbalesters

A Cavalier with its predecessor the Knight in the Definitive Edition 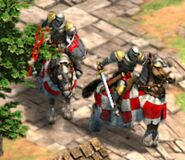 A couple of Cavaliers in the Definitive Edition 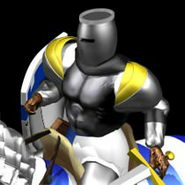 A render of the Cavalier model