12 feet
The Cataphract is heavy cavalry unit available to the Chinese Age of Mythology: Tale of the Dragon. It is unique among other cavalry units as it is effective against infantry units.

At first sight it's easy to dismiss this unit's utility, as it's speed is mediocre for a cavalryman, while also having the lowest attack of Heroic Age cavalry, lower even than the Raiding Cavalry's. It also costs much gold.

However, certain quirks compensate for its seemingly unremarkable stats, making this unit one of the most cost-efficient cavalry. To begin, they have the most hack armor out of cavalry, which combined with their neat HP, can make them hard to tackle with some anti-cavalry, such as Hoplites, especially in late stages, as with Dragon Scales, their hack armor exceedes 50%, making them take approximately half damage from all melee attacks. One can also choose Chongli's Stirrup instead, granting a substantial +25% HP rise, that still manages to make Cataphracts a hard-to-beat unit.

Also, they are the only cavalry units to counter infantry Units, as they have a bonus against them; this combined with their high hack armor, low population cost and still neat speed means they are an excellent counter against enemy Infantry, including units such as Hoplites and Ulfsarks, while also being a threat to enemy archers. Of course, anti-cavalry cavalry, such as Camelry are a formidable counter, as well as massed archers, so it is highly recommended to accompagny Cataphracts with Mounted Archers and War Chariots, to assist against cavalry and archers respectively. 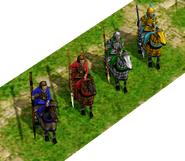 Chinese Cataphracts and their various upgrades. 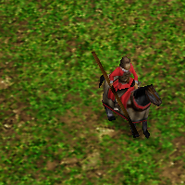 Greek and Chinese Cataphracts fighting each other. 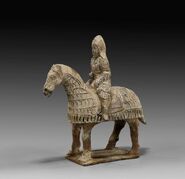