The Castle is a building only available to Chinese in Age of Mythology: Tale of the Dragon. It is where Chinese siege weapons and elite human units are trained.

Castles fire multiple arrows at enemies within range, mowing down those with low pierce armor. They can be used to bolster a town's defenses, strengthen a player's claim to a neutral area, or as a forward base. However, Castles are defenseless against melee attacks unless they are upgraded with Boiling Oil, and, while formidable at defense, they are not invincible. Siege weapons either outrange them or take little damage from their attacks. In a large enough group, human soldiers can destroy a Castle, though not without suffering substantial losses.

The Chinese Castle is a fortified stronghold built mostly for defensive purposes. When units are garrisoned inside, they stay protected and contribute to the firepower of the Castle. The building can also be used to train units and research technologies that improve their effectiveness in battle.

Due to their need to defend and control large and often mountainous areas, the Chinese would perch their castles on mountain tops and often surround them with a massive fortified wall. 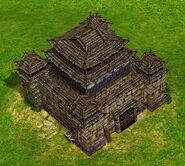 Castle in the Heroic Age

Castle in the Mythic Age 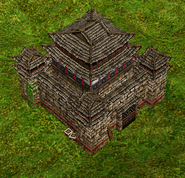 Player 2 Castle
Add a photo to this gallery
Retrieved from "https://ageofempires.fandom.com/wiki/Castle_(Age_of_Mythology)?oldid=276331"
Community content is available under CC-BY-SA unless otherwise noted.