Age of Empires Series Wiki
Register
Don't have an account?
Sign In
Advertisement
in: Towers, Age of Empires III, Exploration Age,
and 2 more

The Castle is a military/defensive building in Age of Empires III: The Asian Dynasties that is unique to the Asian civilizations (Chinese, Indians, and Japanese). A combination of the Outpost and Artillery Foundry, it attacks nearby enemies, trains and upgrades artillery, and serves as a drop-off point for Home City shipments.

The Chinese also train two of their banner armies in the Castle, the Black Flag Army and Mongolian Army. 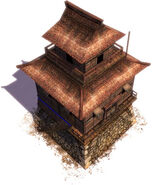 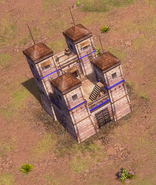