The Castle is a defensive structure and military building in Age of Empires II that becomes available once the Castle Age is reached. It is an important building in later stages of the game, being a powerful fortification and providing unique technologies and units as well as Trebuchets.

When playing Regicide games, each player starts with an additional Castle near to their Town Center.

Castles are often built inside minor fortifications outside the player's settlement. Surrounding the entire base with walls along with towers provides additional protection. If a river separates their base from the enemy's, walling up the river's shallows and building a Castle at the shoreline helps to protect from Transport Ships or ambushes. Castles are also of great use at major choke points, especially if Murder Holes is researched. Garrisoning a few melee units to fend off Battering Ram attacks is helpful.

Alternatively, players may build Castles inside their bases, which protects the economy against enemy raiding effectively, while making the Castles less vulnerable against long ranged siege units like Trebuchets.

For Teuton players, researching Crenellations adds +3 range to Castles. This allows them to match the range of Bombard Cannons and (non-Elite) Cannon Galleons, making their Castles more well-rounded, especially on naval maps. Still, long-ranged siege units remain a heavy threat, also because Castles always fire at the closest unit and not the most dangerous or expensive. Consequently, a Castle under attack needs constant attention of the player in order to fulfill its roles effectively.

If running for a Relic or Wonder victory, Castles can become very useful to build up the defense of the Wonder or the Monasteries holding Relics, but the support of other structures such as Walls and Towers is also required. Also, the player must have sufficient numbers of troops (especially cavalry) for countering enemy siege units. In Regicide games, the Castle is a safe (yet obvious) place for the King if properly supported by other defensive structures.

Some civilizations are able to effectively perform a Castle drop, which involves using Castles offensively by placing them near an enemy settlement and then spamming unique units, Petards, and Trebuchets from the Castle.

An empty Castle is able to fire five arrows at a time, with a base damage of 11 each. Garrisoning either Villagers or archers adds additional arrows to the Castle's fire, up to maximum of 21. One base arrow and 20 additional arrows are fired. The Castle inherently already has 4 "power" which is listed in the attack with parenthesis. Not all garrisoned units add the same number of arrows, their value is generally dependent on two factors: attack and Rate of Fire. The more damage output the garrisoned units have the higher the number of arrows fired.

For a Teuton player with Crenellations researched, fully garrisoning infantry of the same type enables the Castle to fire 12 arrows (7 extra).

The following table shows the maximum number of arrows a Castle can fire, when it is garrisoned with units of the same type:

Each building style has a unique design for the Castle.

All Castles in The Age of Kings and The Conquerors

All Castles introduced in the HD expansions

All expansion Castles in the Definitive Edition

Spritesheet for the Castle

The Beta versions of the Castles in The Age of Kings. 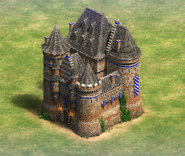 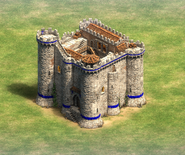 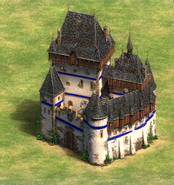 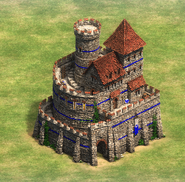 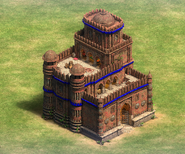 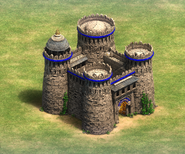 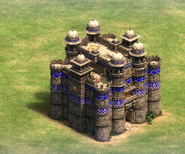 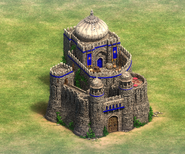