Carolina is a map in Age of Empires III.

Carolina is a map generated along the shoreline of what is now North and South Carolina, it features several Trade Routes and Cherokee or Seminole native populations. There are two versions, the normal and the Large Carolina, which features even vaster spaces, as well as more resources and Treasures.

This map is also used in the first scenario in Act II: Ice, where the colony of Brunswick is featured.

This map is unique because of the abundant starting resources. Carolina features a central Trade Route that divides the map into two sections, the first being the eastern one, with average resources, close to the ocean. The other, the western one, is a dense forestland with more abundant resources.

The central Trade Route features four Trading Post sites. In addition, two Cherokee village are always guaranteed to be found on the map - occasionally, a Seminole village or two can also be found. The two Cherokee villages are somewhat near the trading route - the Seminole, if any appear, will have a village either deep in the woods. However, if a second Seminole village is generated, it is often found on the middle of the coastline.

The map can occasionally generate a tiny island, which may contain some resource crates - however, few buildings can be built on it.

Players will start close to the ocean, but in larger games, they may start further away. A player who has naval dominance can overwhelm any enemy settlements near the shore with consistent shelling by Monitors. However, building near the shore also limits the direction of enemy attacks. 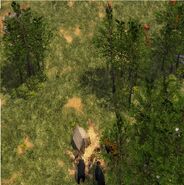 The Carolina map with the small island included
Community content is available under CC-BY-SA unless otherwise noted.
Advertisement