The Carolean is a heavy infantry unit in Age of Empires III: Definitive Edition that is unique to the Swedes and can be trained at the Barracks, Fort, and Galleon. It is a rapid-firing Musketeer which moves faster and has a stronger attack while in Melee Mode.

Caroleans have a lower base damage on their ranged attack, but a quicker rate of fire, which makes them do the same amount of damage per second as the European Musketeer. They have a stronger melee attack when compared to most of Musketeer-type units, even Janissaries and Sepoys, but their melee attack does not have a multiplier against cavalry or shock infantry. Instead, Caroleans have a multiplier against heavy cavalry and shock infantry on their ranged attack. They cost less food and more coin compared to regular Musketeers, and also move slightly faster.

Caroleans become very effective upon reaching the Fortress Age and Industrial Age, due to the availability of upgrades through Home City Cards. They can get 15 range through the Snaplock card, which is the highest range for a Musketeer-type unit, beating the Regular (14 range) and Tomahawk (gets 14 range through Lacrosse). They also gain more attack bonus against heavy cavalry and shock infantry through the Platoon Fire card. The Svea Lifeguard card provides 15% hit points and also converts the melee resistance to ranged resistance. With all of the upgrade cards and Arsenal upgrades combined, they become one of the strongest late-game Musketeer units in the game, similar to the Ashigaru Musketeer.

They have a unique Carolean Charge ability that increases their speed for a limited time and locks them on melee mode, which can be used to perform a surprise attack, especially against light infantry, or to catch units that are trying to flee or to retreat from an unfavorable fight.

Carolean Charge: For the next 8 seconds, all Caroleans have their speed increased by 1 but are locked into Melee Mode. 90 seconds cooldown; shared across all Caroleans.

As Caroleans are unique to the Swedes, only technologies that they have access to are shown in the following table:

As Caroleans are unique to the Swedes, only their cards and other civilizations' TEAM cards are shown in the following tables:

Carolean image from the Compendium section 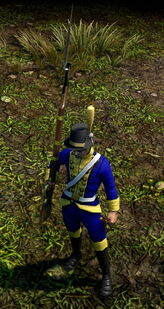