The Caravel is a military naval vessel in Age of Empires III that can be trained at the Dock once the Commerce Age is reached. It can transport land units and gather from fishes and whales.

Caravels are available to European civilizations (except the Ottomans, who have Galleys instead), and the Indians.

The Caravel is one of the first military ships available in the game other than the Galleon or Fluyt. Although it is one of the weakest warships in the game in terms of survivability, it is fast, versatile, relatively cheap and yet has surprisingly heavy firepower and high DPS for its cost and small size. It costs only 300 wood and 100 coin and can be built in a short amount of time. The Caravel is very useful at exploring uncharted waters because it is not big as other large ships so it can move faster and can store troops inside it and transport them faster. It can also be used to clear out weak coastal enemy positions at beaches as well as harassing enemy Fishing Boats. However, it is most effective combined with the heavier Galleons and Frigates to take the heat while the Caravels exploit their high DPS. Moreover, care should be taken when near Outposts and Town Centers that can easily destroy one in just a few shots. The Caravel is also one of the only warships that can harvest from fish and Whales just like Fishing Boats, with a gather rate of 0.67 and 0.5.

Caravels are one of the easier ships to repair at a Dock due to their low hit points, this means a player can withdraw a damaged vessel and have it back in the fight in a relatively short period of time.

The Spanish may want to use Galleons and Privateers instead, due to the "Spanish Galleons" and "TEAM Inquisition" cards.

Most civilizations can ship Privateers during the Commerce Age. Though they lack a Caravel's speed and ability to gather resources, they are tougher and possess greater line of sight than most ships in that Age. 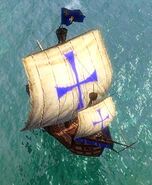 A Caravel in motion