The Caravel is the second unique unit of the Portuguese in Age of Empires II HD: The African Kingdoms. It can be trained at the Dock once the Castle Age is reached. It is a warship that fires bolts like a Scorpion that can damage multiple enemies.

Caravels can be upgraded to Elite Caravels in the Imperial Age.

Caravels deal damage in a straight line with every hit, allowing them to injure and even kill clusters of units on the shoreline, or sink masses of enemy ships in naval combat.

Stat-wise, Caravels are generally superior to War Galleys in most departments except ship-to-ship damage. They will generally lose to War Galleys in one-on-one combat, and an Elite Caravel will be defeated by a Galleon, but a large fleet of them will defeat an armada of those counterparts due to the nature of their projectiles.

A Caravel is slightly more expensive than a War Galley, but it does not need to be upgraded and is available instantly once the Castle Age is reached. Building both Caravels and War Galleys/Galleons in the late game is a good idea only if the player's economy allows it, but doing so will give the player a very effective anti-ship armada at their disposal, with Galleons acting as the main naval force and Caravels acting as a tank unit.

As Caravels are unique to the Portuguese, only technologies that are available to them are shown in the following table:

A caravel is a light sailing ship widely used by the Portuguese during the early modern period for long voyages. Apparently developed by the Portuguese for exploring the coast of Africa, the caravel's chief excellence lay in its capacity for reaching remarkable speed and sailing to windward. Nina and Pinta, two of the three ships used by Christopher Columbus during his historic voyage to the New World in 1492, were caravels.[1] 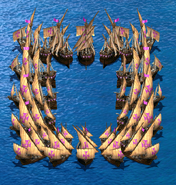 A group of Caravels

A Caravel's missile can pass through multiple ships. 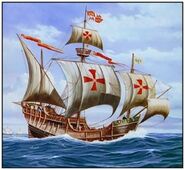 A painting of a square-rigged caravel

Caravel in the HD Edition and Definitive Edition