The Caravanserai is a military building in Age of Empires III: The Asian Dynasties that is unique to the Indians and becomes available once the Colonial Age is reached. It fulfills a similar role to the Stable, but trains camel and elephant cavalry instead.

As Caravanserai are unique to the Indians, only technologies that they have access to are shown in the following table:

As Caravanserai are unique to the Indians, only their cards and other civilizations' TEAM cards are shown in the following tables:

"A caravanserai was a quadrangular building frequented by merchants along routes in the Middle East, North Africa, and Southeastern Europe. It was designed specifically to accommodate the needs of travelers and their pack animals. The central courtyard featured a fountain and was opened to the sky. The caravanserai was surrounded by a series of arcades and stalls large enough to keep 300 to 400 camels comfortably. A typical caravanserai offered refreshment for humans and animals, space for religious worship, lodging, and a small market where those passing through could purchase new goods for the road ahead. Some of the more elaborate caravanserai even offered luxurious private baths.

The word “caravanserai” is derived from the Persian “karwan,” which signifies a company (or “caravan”) of travelers in a large inn or “serai.” Early Muslim rulers often built and maintained these inns on well-worn travel routes to encourage political solidarity, trade safety, and economic growth of their kingdoms." 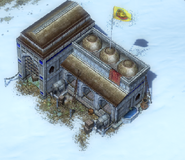 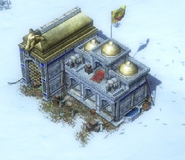 A Caravanserai after the Industrial Age
Add a photo to this gallery
Retrieved from "https://ageofempires.fandom.com/wiki/Caravanserai?oldid=258704"
Community content is available under CC-BY-SA unless otherwise noted.