All except Bengalis, Dravidians, Gurjaras, and Hindustanis

The Capped Ram is a non-ranged siege unit in Age of Empires II that can be trained at the Siege Workshop once the Imperial Age is reached. Compared to the Battering Ram, the head of the Ram is now capped with a metal head, thus making it deal 25 more damage against buildings. Another notable feature is that the Capped Ram upgrade allows Rams to deal splash damage to adjacent structures and units. The upgrade is available to all civilizations except Bengalis, Dravidians, Gurjaras, and Hindustanis, which get the Armored Elephant line instead of rams.

Rams are very useful in tearing down enemy Walls and clear makeshift obstructions. Also, Rams perform outstandingly against stationary Trebuchets. A Capped Ram can garrison up to five foot units (infantry, archers, or Villagers), up from four with the standard Battering Ram. Only infantry units improve the speed and attack against buildings.

Rams do not have any melee armor (in fact melee attackers get an attack bonus of +3), so any unit with a melee attack can destroy a Capped Ram rather quickly. The best ways to destroy them are with Mangonels, Mangudai, cavalry, or infantry. However, due to their high pierce armor and HP, they can withstand most ranged attacks easily. In fact, it is sometimes useful to add a few Capped Rams to an army for the sole purpose of soaking up enemy archer fire to protect the main force.

Capped Rams can cause enormous damage if left ignored. Although they can attack units, the damage they do to non-siege units is negligible. However, they can be used against Trebuchets and other siege units to good effect. The Capped Ram is good against arrow-shooting Towers, buildings, and Castles. In The Age of Kings, it is not recommended to use Capped Rams against Bombard Towers, because Bombard Towers deal melee damage. However, that was changed in patch 1.0b of The Conquerors, and Bombard Towers now deal pierce damage, meaning they do almost no damage to Rams.

Since The Conquerors, infantry and foot archers can load themselves into Capped Rams, giving enemies a nasty surprise should they attempt to destroy it. Infantry also increase the speed and damage out the rams. The presence of units garrisoned inside a Ram is denoted by a flag on top of the Ram (similar to Transport Ships). A Capped Ram may load up to five (four in The Conquerors) units. The relationship shared between foot troops and Rams is mutually beneficial. When they are fully loaded, it is granted a speed greater than that of some foot units. Thus, the Ram may be used as a viable form of rapid transportation for the infantry and foot archers, in addition to providing cover from withering archer fire from Castles and Towers while the Ram closes the gap. Capped Rams can knock holes in Walls and then disgorge infantry directly into the enemy base.

Since The Forgotten, Villagers can also load themselves into Capped Rams enabling them to perform a distraction through deception by loading single Villagers in Rams making them effective dummies that can drive enemy forces away from the player's intended target, and enabling to perform offensive maneuvers. This new ability also enables to the Villagers to make them a better frontal support builders as they can travel inside Rams along with infantry and foot archers, and once they reach the intended place they can start to build frontal military structures.

Like with buildings, if a Ram is converted, units inside the Ram will not be converted. They will just be forced to leave the converted Ram.

Rams also provide protection to allied units behind them from arrow-fire of enemy fortifications (but not from projectiles of enemy units or ships). As long as the projectiles from the enemy defenses hit the collision box of the ram, the ram absorbs all the damage and the units behind remain safe. If a ram and a protected unit are close to the enemy's Castle or tower, the arrows fire from a greater angle, and some of the arrows can still hit the unit behind. Exceptions to this case include Villagers behind the ram. Therefore, a ram attacking a Castle even with Murder Holes can be safely repaired by a Villager for longer service. 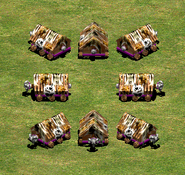 A group of Capped Rams.

The Ram line, with the Capped Ram in the middle.

The Ram line, with the Capped Ram in the middle, in the Definitive Edition.

The splash damage radius of the Rams in comparison. 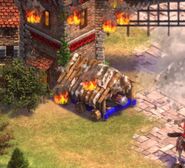 A Capped Ram in the Definitive Edition.
Community content is available under CC-BY-SA unless otherwise noted.
Advertisement