The Canoe is a basic water unit available from the Dock after building a Trading Post on a Native American settlement in Age of Empires III. It is also available for the Native American civilizations (Aztecs, Haudenosaunee, and Lakota) in The WarChiefs.

Canoes can attack, fish (though they are less efficient than Fishing Boats), and transport units, making them very practical, but not necessarily as powerful as other naval ships. They have the same damage output and hit points as a Marathan Catamaran.

Because of its relatively low cost, Canoes are excellent in scouting and providing reconnaissance on nearby enemy territory. However, they are not designed to withstand many enemy attacks and engage in front lines so they should not be sent directly to a fortified enemy base, however if necessary, they would be better off fighting larger ships such as Galleons and Caravels in large numbers, their low cost rendering it an easy task. 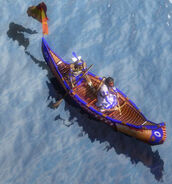 An in-game Canoe, side view

Canoe in Age of Empires III vanilla. It is possible to notice that the fighter used a rifle.
Community content is available under CC-BY-SA unless otherwise noted.
Advertisement