Cannon Galleons are available to all civilizations except for the Aztecs, Huns, Incas, Mayans, and Cumans.

Cannon Galleons have an exceptionally long range and deal very large bonus damage against buildings. They can outrange Castles and Bombard Towers, so they are almost the sea-going equivalent to Bombard Cannons, only being slightly faster. They deal decent damage, but their slow Rate of Fire, slow projectile speed, and minimum range make them weak and ineffective against ships, particularly Fire Ships.

Generally speaking, Cannon Galleons should be used primarily to clear the shoreline of enemy buildings, and occasionally to harass land units at range. They should not be used against enemy ships, and ships are in fact the best way to deal with them, provided sea control has not been lost completely.

Spanish Cannon Galleons are significantly better than the ones of all other civilizations, because their projectiles are much faster (7 tiles/second instead of 3 tiles/s) and hit moving targets with Ballistics-like behavior. The Ballistics research is not required, however. They also fire 18% faster since update 42848. 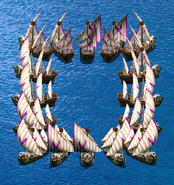 A group of Cannon Galleons

Cannon Galleons can destroy enemy fortifications from a safe distance.

All Cannon Galleons in The Age of Kings and The Conquerors

All Cannon Galleons introduced in the HD expansions 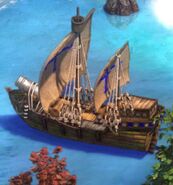 A Central European styled Cannon Galleon in the Definitive Edition
Community content is available under CC-BY-SA unless otherwise noted.
Advertisement