16 feet
Camelry are the main Egyptian cavalry units, and are trained at the Migdol Stronghold in the Heroic Age.

Undocumented 'Medium Camelry' upgrade (free in the Heroic Age): increases attack and hit points by 10% and line of sight by 1.

Camelry can defeat a variety of units in combat, making them quite versatile. Their bonus against cavalry makes most other cavalry units easy pickings, and they can defeat archers due to their high speed and pierce armor. Their speed also allows them to reach and defeat Siege Weapons. Hence they can usually replace the less flexible Spearmen and Slingers in combat.

However, like all cavalry, Camelry are rather weak against infantry. Players can compensate for this by using them with Chariot Archers; these two units together are quite formidable. Camelry are on the expensive side, so they should be used carefully as losing a group of them will lead to an economic setback.

Desert warriors of the Middle East employed camels mainly as dependable transport across the arid wastes of the region. Camels could carry two men in a pinch and reasonable loads. They had reasonable speed for short periods also. In addition, horses unfamiliar with camels shied away from them, making camelry particularly effective against horse-mounted troops. 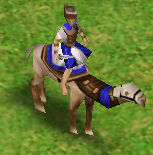 Camelry from Age of Empires: Mythologies
Community content is available under CC-BY-SA unless otherwise noted.
Advertisement