All of them apply in the Feudal Age. These attack bonuses are reduced by 33% for Camel Scouts of other civilizations.

The Camel Scout is one of the three unique units of the Gurjaras in Age of Empires II: Definitive Edition - Dynasties of India. It can be trained at the Stable once the Feudal Age is reached. It is the Gurjara unique scout unit and is strong vs. Scout Cavalry (Feudal Age onwards) and weak vs. Spearman.

Like all unique upgrades, Camel Scouts do not have an Elite version. Camel Scouts are automatically upgraded to Camel Riders upon reaching the Castle Age.

In the Dark Age, Camel Scouts are primarily used as scouting units, as they do not have an attack powerful enough to be an effective battle unit. This also includes the collecting of Sheep and other herdables, and locating resources for mining gold and stone. Camel Scouts are as good as Scout Cavalry (unless allied with Mongols) for scouting. They have the same movement speed and Line of Sight as a Scout Cavalry. When stealing enemy Boars, both are killed in the same hits too. However, Town Centers need 12 arrows to kill Camel Scouts, which is considerably less than other scout units. They also do not have any attack bonuses in the Dark Age, thus making them useless at killing enemy herdables (since they do the base 2 damage). The only positive about the Camel Scout over the Scout Cavalry is that the former always wins in a duel on even grounds.

Upon researching the Feudal Age, Camel Scouts are automatically upgraded and gain +2 attack, +1 Line of Sight, +0.25 movement speed, and a massive +6 attack vs Scout Cavalry. Hence, Camel Scouts serve as more of an anti-cavalry unit than a scout unit by fending off enemy Scout Cavalry. Camel Scouts in team games are very good early Feudal Age units, since they can kill two Scout Cavalry back-to-back, and thus a great defensive tool for the whole team. As camels, they still die to Spearmen, and are weak against archers, though not as bad as they are in the Castle Age (because the Crossbowman is much stronger than the Archer). As fast units with high hit points, they are a good counter to the Skirmisher. Camel Scouts in the Feudal Age are much harder to mass, because they need more time to create, good food economy, and good gold economy, thus combing all the weaknesses of mass-producing Eagle Scouts and Scout Cavalry.

As Camel Scouts are unique to the Gurjaras in Feudal Age, only technologies that are available to them are shown in the following table: 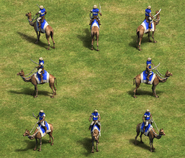 The Camel-line, with Camel Scouts on the left end
Community content is available under CC-BY-SA unless otherwise noted.
Advertisement