The Camel Archer is the first unique unit of the Berbers in Age of Empires II HD: The African Kingdoms. It is a mounted archer with an attack bonus against Cavalry Archers.

The Camel Archer fits nicely in the cavalry based army of the Berbers. Due to their high attack and speed, they can support the heavy cavalry (Cavalier and Heavy Camel Rider) against all kinds of ranged units and are also a good choice if enemy Halberdiers overwhelm the army, since they can perform hit-and-run tactics against them. As far as utility is concerned, they are a versatile unit, as apart from being a hard counter against other mounted archers, they can also serve as a solid anti-infantry unit, and even directly engage against most foot archers.

Camel Archers are quite tough for a cavalry archer, boasting good HP, regeneration (with Maghrabi Camels), and more endurance against common vulnerabilities of cavalry, because they do not take damage from anti-cavalry attacks but from anti-camel attacks, which in general are lower. E.g., Camel Riders deal much less bonus damage (5 instead of 9) and Mamelukes deal no bonus damage at all, making them struggle against massed Camel Archers. On the other hand cavalry archer counters, such as Genitours, and Elite Skirmishers, still remain highly cost-effective against them (see Counters).

It should also be noted that thanks to Kasbah and Conscription, Camel Archers train in only 12.6 seconds, much faster than a generic Heavy Cavalry Archer. They are a better alternative to Cavalry Archers in almost any way, save for cost and the fact they are not available at Archery Ranges.

It is noteworthy that the Berbers lack Parthian Tactics, which makes their post-imperial Camel Archers slightly less resilient against most attacks, while also causing less damage against Spearmen than fully upgraded Heavy Cavalry Archers. However, they generally fare better against units with high anti-cavalry attack bonuses, like the Heavy Camel Rider, thanks to being in the camel armor class and having slightly higher hit points. They also have a lower frame delay, making them more effective in hit-and-run tactics.

If gold is scarce or the enemy heavily relies on foot archers, the Camel Archer can be replaced by the Genitour.

Camel Archers can be countered with Skirmishers and, when massed, with Mangonels and Scorpions. Cavalry units like Camel Riders, Light Cavalry, and Knights can also work decently well against Camel Archers.

Genitours receive bonus damage from Camel Archers and lose in one-on-one combat, but are still cost effective when used against them. In fact, they are a good choice, because they can retreat if melee cavalry arrives to support the Camel Archers (as opposed to Skirmishers).

Eagle Warriors are also a decent choice against Camel Archers, as they have good pierce armor and more speed than Huskarls and Halberdiers, coupled with a reliable attack and an attack bonus against camels.

Comparison to the Mangudai[edit | edit source]

As Camel Archers are unique to the Berbers, only technologies that are available to them are shown in the following table:

Historically, the Berbers were well known for raiding deserts. They rode camels because they were ideal for moving quickly in the sand. Using bows while riding camels would immensely help with raiding. 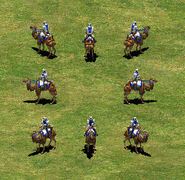 A group of Camel Archers

3D Model of the Camel Archer

Camel Archer in the HD Edition and Definitive Edition
Add a photo to this gallery
Retrieved from "https://ageofempires.fandom.com/wiki/Camel_Archer?oldid=316173"
Community content is available under CC-BY-SA unless otherwise noted.